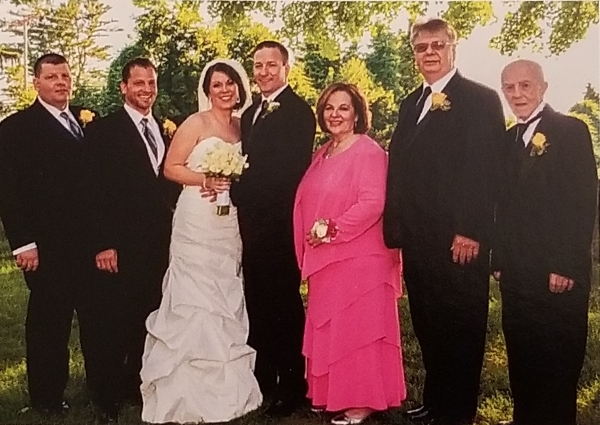 When Debbie was 12 years old, she watched her neighborhood baker decorate a doll cake and was mesmerized.

That year, she decided to try her hand at it, and bought a decorating kit at the state fair. It was the first time she’d ever experimented with royal icing (which can be a royal pain to work with!) and each attempt left her feeling defeated. It kept hardening into the consistency of a Necco wafer.

Debbie was so frustrated, the desire to decorate vanished until she was 19, and joined up with her cousin who was already in the business.

“I’ve never thought of retiring and tell people I’ll probably die with a spatula in my hand. They should just go ahead and put it in the casket with me because I just really love what I do so much,” she said.

From Master to Maven

In 1969, when Debbie was married, she hadn’t yet honed her craft but still wanted the “in” cake that year. Luckily, they found the cake, decorated with fountains and bridges, that she’d dreamed of.

Debbie’s cake had more going on than most did at the time. The majority of cakes were much simpler than the ones we see today, and fondant (a frosting with a consistency similar to clay that’s easy to shape) was not yet in fashion.

Her expertise in hand-molded masterpieces is something she learned by training with pastillage master Pasquale ‘Pat’ Rocco. He was celebrated for his magnificent sugar creations, as well as his role as Executive Chef for Governors Hugh Carey and Mario Cuomo.

In 1986, Debbie was recognized as “Chef of the Year” by the Capital District-Central New York Chapter of the Culinary Federation of America, the country’s premier professional chefs’ organization.

She’s also won the Escoffier Metal of Merit for Excellence in her field. In 1995, she was invited to the White House when her ‘Night Before Christmas’-themed edible ornaments were used on that year’s holiday trees.

One look at Debbie’s cakes says it all.

Some are classic and clean, decorated with finely piped lines and real flowers. Others are playful, feature fun characters and interesting shapes. Then, there are the ones that are totally unbelievable.

Debbie’s delicately sculpted flowers and bows are so life-like that they are often mistaken for the real thing. For one incredible cake, she hand-painted golden edges on a whopping 5,000 flowers.

They had to climb a ladder to assemble an elaborate seven-tiered cake inspired by the one created for Prince William and Kate Middleton's royal wedding. She’s also recreated a smaller version of the $30,000+ chandelier cake that appeared on Sex in the City.

“People come to me because they know I can do something harder than what normal people can do,” said Debbie.

She’s baked for just about every big name in Saratoga, including Mary Lou Whitney, and the Riggi Family, as well as celebrity visitors including singers Jennifer Nettle and Julio Iglesias.

Debbie’s clients keep coming back, so today, she is now making cakes for their children’s special events.

Debbie’s husband, Jerry, is her main delivery man and while their own three boys were growing up, she often told clients to just make checks payable to their colleges, because that’s where all the money was going anyway.

Now, they have three grandchildren and Debbie loves baking (and eating!) cakes with them.

Of the 15 different cakes and 20 different fillings she makes, her favorite is the same as half of the people she bakes for – a dark, moist chocolate cake made from a recipe that’s been handed down through Jerry’s family for generations.

Fake the Cake  - Want a spectacular, towering wedding cake but don’t have enough guests to serve it to? Decorated foam tiers add height and look just like the real thing!

Trim Costs on Sugar Flowers  - Hand-sculpting and painting flowers is very labor-intensive. Get gorgeous variety by mixing handmade flowers with the ones that are popped out from a mold for a less expensive (but equally pleasing) alternative.

Go Ahead Grooms, Get in There  - Today’s grooms are more involved in the wedding planning process than they’ve ever been, so don’t be shy guys, your opinion matters, too!

Extravagant Inspiration, Beautiful Adaptation  - Did you fall in love with a celebrity cake that costs as much a house? Don’t despair, your baker may be able to create a scaled-down version (that is just as pretty) at a price you can actually afford.

View the embedded image gallery online at:
https://saratogabride.com/component/k2/item/137-meet-debbie-coye-saratoga-s-cake-maven#sigProId56502f3abe
More in this category: « Carefree Cookies & Cocktails Bach 2.0: Parties That Are All About Beauty Inside & Out »