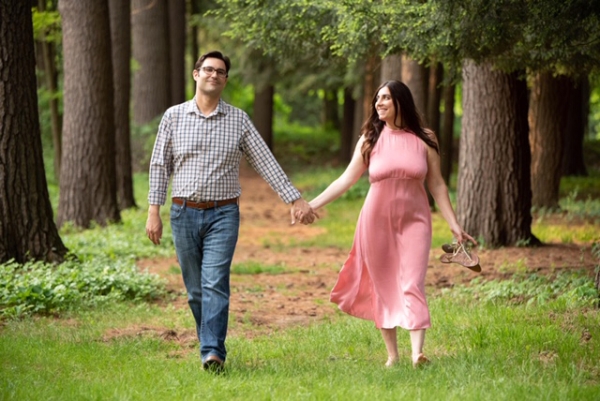 In the summer of 2015, Josh had just walked out of his dental residency, eager to get out and help new patients in practice. He was also ready to find his life sidekick.  The tinder search -narrowed to less than a one mile away radius, and there he found Erin, a whopping ten city blocks north of where he’d been living the last few years.  They met over a cocktail at the Writing Room, former hot spot “Elaine’s,” exactly five blocks from each other’s apartment.  It was slow to start, and probably a bit on the quiet side, as Josh tends to be at first, but it was comfortable, funny and interesting.  They continued to speak and go on fun dates in Central Park, feeding each other food they had prepared and attending live music concerts.

There were many unknown connections between them via family and friends that came to light time and time again as they got to know each other better.

Josh had officially received his NYS dental license within a week of meeting Erin and has had her by his side as a young associate working six days a week his first year in practice.  He learned a lot from working with his uncle, Abe Bronner, an experienced and successful dentist, but followed leads to other dental opportunities outside of south Brooklyn.  Over the next year he treated patients at offices in Huntington and Massapequa.  A “small-world” type of opportunity was stumbled upon last summer and the couple decided to pack up and head north after getting engaged, to Saratoga Springs, NY, where they currently reside.

Josh has been practicing dentistry locally in Saratoga since moving to the area early in the fall.  Erin, having over ten years’ experience in property management in Manhattan, has begun to expand further into the real estate world and recently obtained her NYS real estate license.

Erin, born and raised in Melville on the North Shore of Long Island, was living on the Upper East Side of Manhattan working for a property management firm. She became fast friends with a wonderful group of professional women, all single and in their 20s. The girls would often get together for dinner and drinks to catch up, talk about their jobs, organize summer trips to Montauk and bond over their recent dating experiences, sometimes juicy, other times disheartening but most of the time extremely comical. The women would give each other advice, encourage one another to stay positive and to never stop believing that “the one” was out there, despite the very challenging New York City dating scene. Their get together often felt like they were out of an episode of “Sex and the City.” The girls all unanimously agreed that their parents had a much easier time when they were single - 30 plus years ago.

Erin’s father, Dennis Keith Linde, of Canarsie Brooklyn, and his mother Maxine E. Friedman, of Bayside Queens, met on a blind date at 17 years of age and got married a few years later at age 21. A few years after their June 1975 wedding at Fresh Meadows Synagogue (Fresh Meadows, Queens), the couple purchased a very pretty and spacious colonial in the town of Melville on Long Island and had three beautiful children by age 30. Dennis owned an Auto Parts business and Maxine was an elementary school teacher (currently retired).

Erin, continuously encouraged by her friends, did not give up. She started chatting with Josh on “Tinder,” the dating app, which people would often label as the place to go for quick flings. Based on Josh’s online dating profile, he was attractive with a full head of dark hair, from the South Shore of Long Island, Jewish and a dentist.

(in other words, every Jewish mother’s dream candidate for their single daughter!)

Erin and Josh met on July 24TH 2015 for a casual drink on the upper east side. One drink date turned into a second dinner date to a third date walking around the reservoir in Central Park to a fourth date attending an outside concert to beach dates to summer bike rides with ices…barbeques with friends to family dinners and holidays spent together… Fast forward to August 3rd 2018, when Josh surprised Erin with a gorgeous diamond ring on the boardwalk overlooking the ocean in Long Beach, NY. The couple both feel very lucky and blessed to have met each other and know the future is bright! Both Erin and Josh are kind, sensitive, passionate individuals who truly love and care for one another, their friends and family. They encourage one another and are focused on continuous growth in their careers and personal lives.

Erin lost her father, Dennis Linde, to pancreatic cancer a little less than 9 years ago. Josh never had the opportunity to meet Dennis, who Erin knows would have absolutely loved Josh and would have been honored to call him his son-in-law (and vice versa). Josh would have absolutely loved Dennis and be thrilled to have him as his father-in-law. Dennis was a passionate, loving, funny, sensitive, caring man. He had a very special energy that his family and friends miss immensely. Erin knows that though her father won’t be there in body to walk her down the aisle, he will be there in spirit and his love and energy will surround her and his family on this very special milestone.

Shortly before getting engaged, Josh was presented with a wonderful opportunity in Saratoga Springs, NY and the couple decided to move 3.5 hours north to start their new and very exciting adventure together! The couple just married on June 15th at Temple Avodah in Oceanside, New York.  They have been living in downtown Saratoga Springs for a little less than a year and have fallen in love with the town, the vibe, the people and culture. Erin and Josh both love to attend live concerts, enjoy beautiful scenic hikes, admire sunsets regularly, observe the beauty of nature and try new restaurants. The couple also enjoys jogging outside together while exploring and admiring the history and architecture of their new neighborhood. Erin and Josh are excited to build a beautiful life together in their new and very special surroundings that they now call home! They truly feel blessed to have found one another, to be starting a new journey together as husband and wife and to call Saratoga Springs their new home!